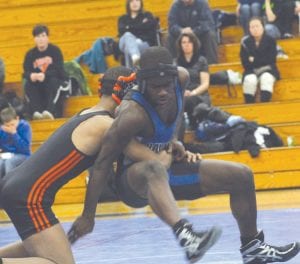 FLINT TWP. — Stepping away from the Big Nine in favor of the Saginaw Valley League-South is going to be a big step up in competition for the Carman-Ainsworth varsity wrestling team. The change in intensity the Cavaliers are going to have to make to keep pace with the rest of the conference may be a blessing in disguise, though. That’s because, once the postseason rolls around, Carman-Ainsworth is regularly forced to take on Div. 1 powerhouses such as Davison, Traverse City West, Bay City Central, Saginaw Heritage, Port Huron Northern and Grand Blanc.

To that end, because of graduation, the Cavs will also lack the talents of athletes such as Jake Weissend, who went 58-0 last year at 145 lbs. With Wes Cummings gone at 112 after going 34- 7 in 2011-12, as well, it will be the wrestlers who are returning that end up deciding how far this team goes into the Michigan High School Athletic Association championship tournament.

Among those coming back from last season for Carman-Ainsworth include senior Aaron Dupree at 130 lbs. after going 36-10 at 119 a year ago, senior Shaquel Polacek went 22-14 at 135 last season and is now at 145 and at 215 junior Devon Schofield works to improve on the 16-28 record he posted in 2011-12 at 189. That trend toward moving up in weight is even more pronounced for the Cavs when viewed against junior Jerron Thomas’ jump to heavyweight from 160 in 2011- 12 after winning 27 of his 46 matches a year ago and sophomore Malik Dawkins has exploded to 152 after finishing last season at 112 with a record of 33-6.

Even if that does give Carman-Ainsworth a solid foundation that it can build on, the squad’s going to need more than just those individuals in order to be a contender. That’s why athletes such as Demetrie Hall, Larry Duncan, Jawanza Edwards, Cameron Brown, Darion Vaughn, Grant Roe, Gage Woodward and Lucas Schutt have so much value to head coach Tom Weissend. With Tay Pendleton also coming back for his senior campaign at 215 for the Cavs after a 36-win effort a season ago at 171, the question isn’t if the squad will find a way to post a stronger playoff performance, its when.