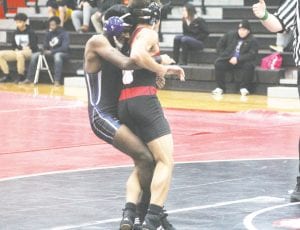 Carman-Ainsworth’s Brijesh Kumar works to bring down a Grand Blanc opponent during a meet at Grand Blanc on December 18. Photo by Joe Oster

At 125 lbs., Brijesh Kumar lost his opening match of the day to Grand Blanc by fall. Kumar received a bye in the first consolation round before having his tournament end with a loss by decision to Bay City Western.

Noah Burn, at 140, lost his first match of the day to Midland by fall and then received a bye in the first consolation round. Burn’s tournament ended with a loss by fall to Davison in the second consolation round. At 189, Davis Mathis had a first-round bye before losing his next to matches by fall to Bay City Central and Midland, respectively.

The Cavs will compete in their team district tournament this coming Wednesday at Swartz Creek with Swartz Creek and Flushing.