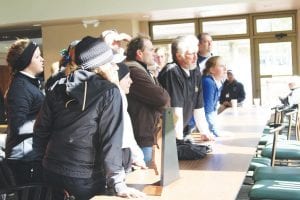 Lake Orion, Grand Blanc (center) and other top teams leaned over the table to check their scores against other teams at the Div. 1 golf regional at the Lapeer Country Club last Wednesday.

Stiff winds that sometimes reached 30-40 mph dogged nearly all teams and took many of the girls out of their comfort zone at the Lapeer Country Club. When the competition started at 9:45 a.m., the temperature was barely at 50 degrees and the course was wet from the previous night’s brief rain. The only common theme of the day was self-doubt according to many of the players, because everyone had to deal with the wind, which at times kept balls moving on the greens making putting difficult at best.

In the end, No. 1-ranked Lake Orion won with a 340 and Grand Blanc surprised everyone but itself when it stole the No. 2-qualifying spot from No. 2-ranked Davison after carding 357 to Davison’s 362. Grand Blanc was last in a state finals five seasons ago. Host Lapeer fired a 365 for fifth place behind Rochester which carded 364, falling just two and three strokes shy of qualifying. Carman-Ainsworth carded 487 for 14th place. Taylor Jarnigin fired a 111, Mikaila Garrison 120, Madysen League 122 and Madison Cox 134.

Grand Blanc’s excitement at qualifying was hard to contain as the girls fell into a group hug, squealing with delight as they realized they had made the cut.

“It feels so good to qualify for states because I wanted to qualify before I graduated,” said Victoria Wirth. Britton Rush and Nicole Ainge had just one thing to say, “I’m really excited.”

Allison Bruett added, “It was our goal to make it to states before we graduated, so..”

Cammi Lucia summed up the long wait to see where her team ended up, “I’m so excited because this is just what our team need. We were just like all standing there hoping for it and we’re just so happy.”

When asked about the awful wind, the girls all groaned in unison with heads tipped backwards, “Awwww!” and laughed with relief.

Lucia summed up how Grand Blanc was able to do what the other teams that didn’t qualify couldn’t; shut out the selfdoubt that sabotaged so many.

“Everyone playing in the same weather conditions and the key is to just keep fighting through it,” said Lucia. “Like, everybody is having the same problems and a lot of people were just giving up. You have to keep that doubt (out) no matter what if it is pouring or there is a hurricane.”

Davison coach Darci Stocker had her finger on what put her girls in such a precarious position, and perhaps the whole field.

“I am pleased as punch that (my girls) made it to the state championship today,” she said. “We did not play well and a lot of people struggled. It was all around and we got beat by Grand Blanc today for example. We knew they were a good team, but we were focused and trying to win today, and the conditions were tough today. We did not play the best that we could not play.”

Stocker also pinpointed everyone’s struggles with the wind and how many failed, or simply didn’t know how, to make that adjustment.

“Oh yeah. I think this is a very tough thing to have to play in the wind. You have to guess first of all, say you are going up hill. Do I have to club up for that? On top of that I am going into a two or three club wind and it’s really hard for a kid to pull up and when they are 110 yards out hit their 150 yard club. To go up four clubs is just overwhelming to them.”

Stocker said she tried to explain to her team that their short game would carry them through, but the girls had a slightly different viewpoint that turned out to be a poor plan.

“Well, as I told them yesterday at practice, you’re going to save strokes chipping and putting tomorrow and they didn’t believe me and so they went onto the range and just kept banging balls,” Stocked said. “I told them, ‘I know you want to get right mentally to go out there and play, but you have to chip and putt to score’. One of my kids had 44 putts today and shot 95. If you have two putts on every hole that’s eight strokes to shoot an 87 so everyone left a lot on the course today. That was a very tough thing for the kids and I hope they learned that lesson.”

The state meet is at Bedford Valley in Battle Creek Oct. 17-18.