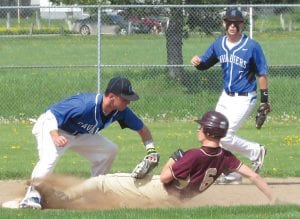 FLUSHING — While the Carman-Ainsworth varsity baseball team has had the good fortune to draw a bye for the first round of the Michigan High School Athletic Association championship tournament on May 28, so has every other team assigned to Flushing district No. 3-1.

That means the Cavs, 10-15 overall, 8-4 Saginaw Valley League, won’t have any extra advantage when they face Kearsley, 12-14 overall, 5-8 Flint Metro League, in game two of the semifinals on June 1.

“We continue to have good hitting and pitching. It has been our fielding that has hurt us all season. Too many unearned runs,” said coach Tom Miller. “If we have a clean game we can beat anyone. Unfortunately, we have beaten ourself more times then teams have beaten us.”

“I think Flushing has the edge, but all teams are good enough to win this district,” Miller said. “ Flushing is the Sagianw Valley champs and they are 21-4 overall.”

At the plate this season Carman- Ainsworth has gotten contributions from players such as Brennan Gleason, Entrice Mitchell, Ethan Lambitz, Alex Thompson and Connor Storms. The Cavaliers’ most lethal weapon this season has been Justin Hubbard, though, who signed his national letter-of-intent earlier this year to play baseball for Adrian University starting this fall.

On the mound Carman-Ainsworth has found consistency in the performances of Noah Reed and Alfonso Foster this year.