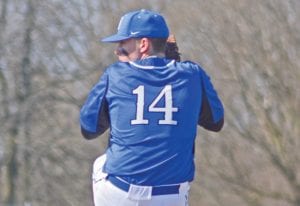 Carman-Ainsworth’s Austin Jerome brings the heat to the plate.

BAY CITY – Cooper Betancourt went 3-for-4 with a run on Monday at Bay City Central as the Carman- Ainsworth varsity baseball team lost the first game of a Saginaw Valley League crossover doubleheader 3-2. Having charted eight hits against 13 allowed, Austin Jerome went 1-for-4 with a run, Lucas Shoffer was 1-for-4 with a RBI and Jawanza Edwards added a hit in four at-bats.

“The first game went 11 innings with Bay City Central hitting a walk-off single in the bottom of the 11th. It was a well-played game of errorless baseball,” said Carman-Ainsworth coach Steve Faculak. “The key was a few base running mistakes for both teams.”

In the second game Edwards stole home to help the Cavaliers win 6-5. Edwards was 1-for-4 with a run, Spencer Fieweig was 1-for-2 with a run and Matt Durbin had a run and one RBI in four at-bats. While both teams made three errors, the Cavs came through with runs in the first and third innings and four more in the fourth while Central had eight hits and scored two runs each in the third and fifth innings.