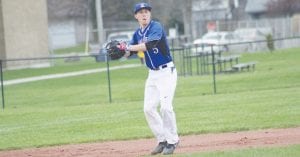 FLINT TWP. — The Carman-Ainsworth varsity baseball team swept Davison in a Saginaw Valley League-South doubleheader 3-2 and 3-1 last Thursday. The very next night, Powers split a SVLSouth twin bill with Flushing, which allowed the Cavaliers to claim a share of this season’s conference championship with Flushing.

In game one against the Cardinals, Austin Jerome earned the decision after allowing just two runs on three hits in 6-2/3 innings pitched prior to Chris Smith making the save. Brennen Gleason then claimed the complete-game victory in the second contest by giving up five hits with six strikeouts.

The Cavs, 8-2 SVL-South, end the regular season at Linden with a pair of non-conference games today.