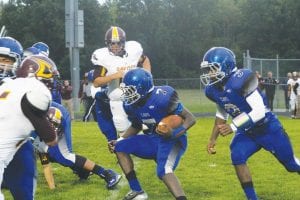 Carman-Ainsworth seniors Tyler Minor (7) and Caleb Ruffin (3) have accounted for more than 2,100 yards rushing and 26 touchdowns this season.

FLINT TWP. – Carman-Ainsworth won’t be seeing the same teams it played in last year’s football playoffs, when the Cavaliers plowed through a tough Div. 1 field to reach the state semifinals for the first time in school history.

By a slim margin, Carman-Ainsworth has dropped to Div. 2 for the 2014 playoffs, which begin this weekend. The divisions are determined by enrollment, and the Cavs were just 90 students below the last Div. 1 qualifier, Traverse City West, which will open at Rockford.

The Cavaliers sewed up home field advantage for the first round by beating Flint Powers Catholic 33-20 in last Friday’s regular-season finale at Holy Redeemer Field. Caleb Ruffin rushed for 135 yards and a touchdown on 16 carries, and Tyler Minor ran 18 times for 131 yards and two scores as the Cavs controlled the Saginaw Valley League crossover game. 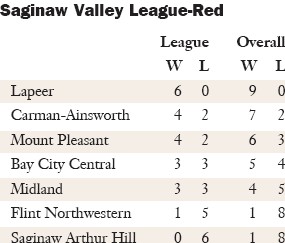 Carman-Ainsworth never trailed after taking a 7-0 lead on Minor’s 47-yard touchdown run midway through the first quarter. Powers pulled within 7-6 early in the second, but Minor scored again on a 10-yard run with 3:32 left, then hit Josh Jackson with a 3-yard touchdown pass just five seconds before halftime for a 20-6 lead.

Powers wouldn’t go away, scoring midway through the third quarter to pull within 20-13. But Carman- Ainsworth answered less than three minutes later with Ruffin’s 2-yard touchdown run for a 27-13 lead.

The Chargers again closed to within seven points, 27-20, with 9:33 left in the fourth quarter, but the Cavs countered just 1:13 later with Jalen Lewis’ 5-yard run to close out the scoring.

Carman-Ainsworth rolled up 301 yards on the ground, and Minor hit 4-of-7 passes for 98 yards for a 399 total. Powers totaled 246 yards, with 128 coming on the ground. Logan Banister caught three passes from Minor for 95 yards. Lewis finished with 35 yards rushing on five carries.

Okemos comes in on a fourgame winning streak that left the Chieftains tied for second in the Capital Area Activities Conference-Blue at 5-2. They have outscored their opponents by a 214-150 margin.

The Chieftains will have to deal with a Carman- Ainsworth offense averaging 37 points a game, led by the dual rushing threat of senior quarterback Tyler Minor and senior running back Caleb Ruffin. Minor has rushed for more than 1,300 yards and 16 touchdowns and has individual games of 318 and 348 yards. Ruffin has more than 850 yards and 10 touchdowns and also has a 300-yard rushing game with 342 against fourth-ranked Div. 1 Lapeer.

If Carman-Ainsworth and Flushing both win, the second round game will be at Flushing.