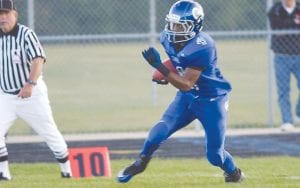 Brandon Lenoir returns a kick for the Cavaliers in a game earlier this season.

BURTON
— All through their 0-3 start, the Carman- Ainsworth Cavaliers never gave up on a football game, even when the score was hopelessly out of reach.

Their persistence nearly paid off two weeks ago, when the Cavs fought back from a 21-point deficit to get within eight points of Flushing in the fourth quarter.

Finally, last Friday, that determination was rewarded, as Carman-Ainsworth rallied for two touchdowns in the last six minutes to beat Powers Catholic, 20-19, in a Big Nine Conference clash at Holy Redeemer Field.

Shane Barron caught a 25-yard touchdown pass from Allen Overton with 5:35 to go, and Overton scored on a 2-yard quarterback sneak with two seconds left as the Cavs, 1-3 overall, evened their record at 1-1 in the league.

The comeback doesn’t mean the Cavs are going to the playoffs, but it was a big step in the maturation of a young team.

“This is huge for us, for the program and for me,” said Cavs coach Nate Williams. “One, being able to come from behind like that gives us a big confidence boost, and understanding that we play to the end.”

“Then, just being able to pull it off. These guys are so young, I think they grew an extra two games just because of the way that game went. We’ve been fighting, but we never came out on top.”

Carman gave itself a chance when Overton’s touchdown pass to Barron capped a six-play, 68-yard drive and Connor Storm’s extra point made it 19-14 with 5:35 left.

The Cavs forced a Powers punt and took over at their own 35. They converted two fourth downs in the drive and had a big completion over the middle to Courtney Weatherspoon.

Barron then took a quick hitch pass all the way to the Powers 2 as the clock ticked down. A running play failed, and Overton spiked the ball to stop the clock. A pass attempt on third down fell incomplete when the receivers got tangled up, leaving the Cavs with one do-or-die play left.

“We knew everybody in America would run with Shane,” he said. “It was a great effort by our guys that gave Allen a chance.”

Overton faked a handoff to Barron, then went the opposite direction, following key blocks by running back Gerald Holmes and tight end Chris McKay. He broke one tackle to get into the end zone.

Holmes also had a big day carrying the ball, rushing for 124 yards on 15 carries. His 58-yard touchdown run in the first quarter gave Carman a 7-6 lead at the time.

Overton, coming off an injury that sidelined him last week, hit 17-of-29 passes for 290 yards, with Barron catching 12 of them for 217 yards.

Barron also had an interception as Carman held Powers to 127 yards rushing and 45 passing. Dominique Doak, a sophomore linebacker just up from the JV, led the defense with 10 tackles, including a sack. Chris Thomas had eight tackles and McKay seven.

The Cavs will host first-place Davison in another Big Nine game at 7 p.m. Friday.