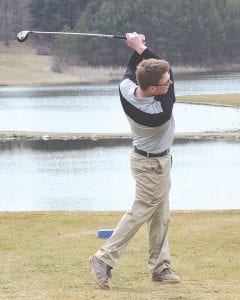 Carman-Ainsworth’s Griffin Rousseau watches his tee shot during last Friday’s Lapeer Tune Up at the Metamora Golf and Country Club.

METAMORA – The Carman- Ainsworth boys’ golf team opened its season at the Lapeer Tune Up last Friday, placing 22nd with a 496 while in the cold and windy conditions at Metamora Golf and Country Club. Utica Eisenhower took home first with a 323, Lapeer followed in second with 326 and Fenton was third with a 343.

John Karbowski led the Cavs with a 96, while Griffin Rousseau followed with a 122. Jalen Stewart carded a 133 and Aaron Carter finished with a 145 on the day.