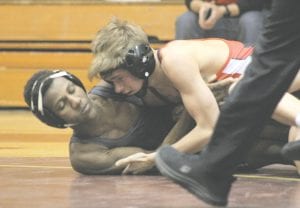 Carman-Ainsworth’s Larry Brown Jr. works against a Grand Blanc opponent during a match on December 19. Photo by Joe Oster

Bennett opened his tournament with a first-round bye before losing to Birch Run by fall in the quarterfinal. In the second consolation round, Bennett received a bye to the consolation semifinal, where he defeated Perry by sudden victory. In the fifth-place match, Bennett lost by fall to Bronson to finish sixth.

At 171, Nathan Taylor lost his opening match by fall to Mayville and was then knocked out of the tournament with a loss by decision to Caro in the first consolation round.

Carman-Ainsworth hosted a quad Wednesday after we had gone to press and is at Lapeer next Wednesday at 6 p.m. – A.V.

The Carman-Ainsworth girls’ bowling team took a 27-3 triumph at Midland Dow last Thursday. Victoria Roe rolled a 170, Angie Porter had a 162 and Molly Doty a 161. Sarah Roe put up a 146 and Tanya Jefferies totaled 111. Boys scores were not reported.