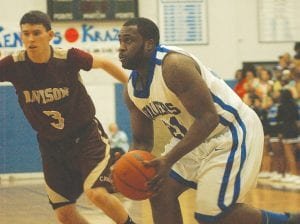 FLINT TWP. — Bob Root saw it coming before anyone else in the gym.

His Carman-Ainsworth boys’ basketball team had just given up two breakaway layups by Davison to see a 24-point lead cut to 20 midway through the third quarter of last Friday’s Big Nine Conference game. It didn’t seem to be a problem at the time, but Root sensed trouble and immediately called timeout.

Davison turned that early trickle into a deluge of points and completely washed away Carman’s lead, even taking a two-point lead late in the game before the sinking Cavaliers righted the ship.

Denzel Watts scored six points in the final 47 seconds and Trevette Cochran-Moore hit a crucial one-andone at the 40-second mark, as the Cavs pulled out a 69-60 victory in a game they had dominated for 2-1/2 quarters.

Carman stormed out to a 27-7 firstquarter lead, getting halfway to a running clock in the first eight minutes. It was still 50-26 early in the third before Davison began its comeback. The Cardinals scored 12 straight points at one stretch and finished the period on a 15-2 run to get within 54-45, then tied it, 56-56, on a 3-pointer with 5:10 left. Davison took its only lead, 60-58, on Cody Wangler’s layup at the 2:21 mark, but those were the Cardinals’ last points.

Larry Doby re-tied it at 60 on a putback, then blocked one Davison shot and took a charge on another to keep it tied. A Watts jumper from 15 feet put Carman ahead for good, 62-60, with 47 seconds to go.

“Fortunately, down the stretch, we made some free throws and got a couple stops,” said Root. “It ended up being a good win because it would have been a horrendous loss.”

Watts ended up with 23 points, Anton Wilson scored 15 and Nick Hill had 13.

The Cavaliers, 8-4, 2-1 Big Nine, were scheduled to visit Flint Northwestern in a non-league game Tuesday and will host Flushing in league play tomorrow.