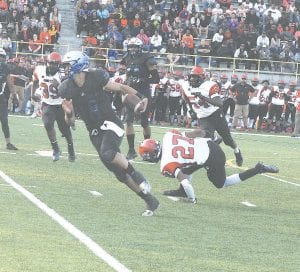 FLINT TWP. – Carman-Ainsworth’s football team amassed a huge lead early on, but ultimately lost out during a hard-fought first game of the season with Grand Blanc last week, losing 51-46. The two teams were the marquee game of the inaugural Vehicle City Classic at Atwood Stadium.

Carman-Ainsworth started the game out on fire, scoring 25 points in the first quarter, starting with a 1-yard run up the middle by Jacari Roberts for the score. Following the touchdown, Carman-Ainsworth’s defense stepped up, forcing a 3-and-out which then led to a 35-yard connection from Dustin Fletcher to Jakobe Blount, leading to a 14-0 lead. The very next play, Carman- Ainsworth recovered a fumble, and, following the drive, managed a field goal by Mohamed Farhan to extend the lead to 17-0.

The Bobcats would finally get on the board thanks to a 34-yard touchdown pass and a successful two-point conversion, but Carman-Ainsworth’s Malik Bashin-Cager would return the ensuing kickoff, bringing it 93-yards to the house to put the Cavaliers up 25-8 after a successful 2-point conversion to end the first quarter.

The second quarter opened with a Grand Blanc touchdown before Carman-Ainsworth scored on a 60-yard run from Jalen Smith, its lone touchdown of the quarter. Grand Blanc would close out the quarter on a strong note, though, with a four-yard run to bring the score to 32-24 at the half.

Following the break, Grand Blanc added another touchdown to its total, but failed a two-point attempt. Roberts scored Carman-Ainsworth’s lone touchdown of the quarter with a four-yard run into the end zone, bringing the score to 39-30 at the end of three.

The final quarter was all Grand Blanc, as the Bobcats put up 21 points compared to just seven by the Cavaliers. Roberts would get his third touchdown of the game, thanks to a 15-yard run. Carman-Ainsworth would see one final chance to regain the lead it once held, but would turn the ball over thanks to an interception in the end zone during the final minute of play.

Individual stats were not reported. Carman-Ainsworth will be back in action today, when it takes on Arthur Hill at home at 7 p.m.