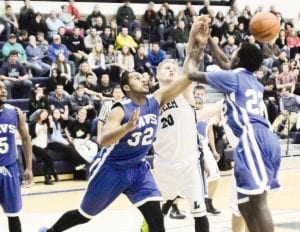 Juwan Evans, Josh Jackson and Isaac Gillum each scored 11 points and Jaylen Bradley had 10 for the Cavs. Evans also had 10 rebounds, Gillum grabbed seven and Bradley had five. Jakavien Lewis added seven points as nine Cavaliers got in the scoring column.

Last Friday in their SVL opener, the Cavs barely escaped Lapeer with a 33-32 victory. Jarell Giles had 10 points and five steals, and Carman-Ainsworth survived when Lapeer missed a 3-point shot with three seconds left. The Cavs had 24 turnovers but pressured the Lightning into a similar number of miscues. Jackson added seven points, and Bradley had five points and seven rebounds. Lewis had four rebounds and four steals.

Carman-Ainsworth, 1-2, 1-1 SVL, is not the same team that went 21-4 and 12-0 in the Valley last year. The Cavs are rebuilding after graduating several key players.

“It’s definitely different, that’s for sure,” said coach Jay Witham. “Last year we were able to do a lot of different schemes. This year we have to kind of simplify things and slow things down and build one day at a time.”

Carman-Ainsworth will visit Davison in another SVL-South game tonight.