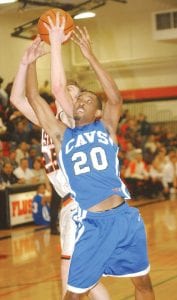 Larry Doby fights for a rebound in a recent game.

FLINT — It’s tough enough trying to beat Flint Powers Catholic on the basketball court without spotting the Chargers a 20- point lead in the first 10 minutes.

Carman-Ainsworth did just that last Friday and still nearly pulled off a miracle comeback, erasing all but four points of a 24-4 deficit before losing, 62-48, in a Big Nine Conference game at Powers.

The Cavaliers battled back to within 37-33 on a 3-pointer by Cameron Morse with 1:56 left in the third quarter. But they never saw the lead, and fourth-ranked Class B Powers pulled away again with a 19- 8 run to go up, 56-42.

The loss dropped Carman to 1-1 in the short Big Nine race, with a rematch against Powers on Feb. 11 at home.

Denzel Watts scored 14 points—12 of them in the second half— and Anton Wilson added 13 to lead the Cavs. Desmond Morris scored eight and Trevette Cochran-Moore had six.

Watts had 20 points and Larry Doby scored 12. Both had five rebounds. Wilson managed only six points but grabbed seven rebounds.

The Cavs, 7-4 overall, will resume Big Nine play Friday with a home game against Davison at 7:30 p.m.