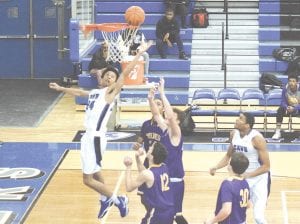 Carman-Ainsworth’s Chris Ballard tries to rise above the rim for a rebound against Bay City Central on Jan. 16.

FLINT – The Carman-Ainsworth boys’ basketball team continued its eight-game winning streak on Tuesday night, blowing out Hamady 82-54. The Cavs went on a 27-13 run in the first quarter and never looked back.

As a team, Carman-Ainsworth shot 63% from the field and went 10-for-18 from behind the three-point line. The Cavaliers also won the rebounding battle 25-14.

Last Friday, the Cavaliers coasted off another huge first quarter to defeat Midland Dow 63-46. Carman- Ainsworth’s hot start resulted in a 28-9 opening quarter, which allowed them to cruise to an easy victory.

The Cavs shot 20-for-27 from the field and 19-for-22 from the free-throw line. Carman-Ainsworth also outrebounded the Chargers 14-8.