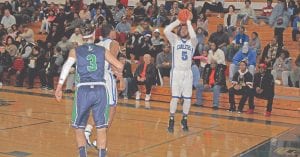 Jaylen Bradley squares up for the jump shot at home in SVL-South action at home on Jan. 29 against Lapeer.

FLINT – In the battle for Genesee County bragging rights, as well as the race to the top of the Saginaw Valley League-South standings, the Carman-Ainsworth varsity boys’ basketball team made the short trip over to Powers last Friday.

While the first time these teams met this season the Cavaliers dominated to earn a 77-47 home victory on Jan. 15, this affair was a much closer one that ended with Carman-Ainsworth coming out ahead 59-53.

The Cavaliers’ home non-conference game against Fenton on Tuesday was postponed because of weather and no makeup date has been announced. Currently Carman-Ainsworth is 13-2 overall as of Feb. 9. – M.S.

Carman-Ainsworth moved into a first-place tie in the Saginaw Valley League- South Division by beating Powers Catholic 57-45 last Friday at Powers. Destiny Strother scored 18 points, Randi Richardson had 14 and Chelsey Carpenter 10 as the Lady Cavs, 10-4 overall, beat Powers for the second time and caught the Chargers at 5-2 atop the division. Richardson and Carpenter each added 10 rebounds. 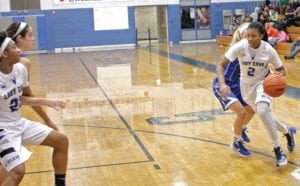 Carman-Ainsworth took a 15-8 first-quarter lead and steadily pulled away, leading 27-18 at halftime and 43-28 going into the fourth quarter.

Tuesday’s non-league game against Fenton was canceled by inclement weather. The Lady Cavs will play at Flint Northwestern tonight. — D.N.