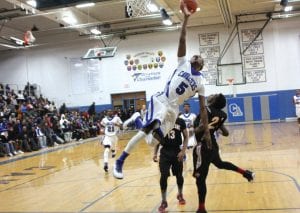 FLINT TWP. — In his first game as the Carman-Ainsworth varsity boys’ basketball coach, Jay Witham and his team were tasked with extinguishing the fire that burned within Grand Blanc on Tuesday.

While the Bobcats fought hard from start to finish, the Cavs still managed to find a way to parlay leads of 20-18 and 39-33 at the end of the first and second quarters into a 80-73 victory. Grand Blanc actually came back in the third to pull within a point at 58- 57, only to get outscored by the Cavs, 22-16, in the fourth.

Cameron Morse was at the forefront of this effort for the Cavs with a game-high 30 points, Justice Green added a 16-point showing and scoring 11 was Jaylen Bradley. Ja’Quin Jones also got in on the action for the Cavs with a nine-point performance and Brennen Gleason scored four.

For Grand Blanc, Kevon Miller had 16 points, Alex Brackett posted 12 points and scoring nine was Jacob Vanitvelt. The Bobcats had three other player with eight points each.