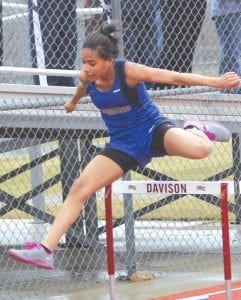 BAY CITY — The Carman-Ainsworth track program has plenty of awards and accolades from years past, however, the Cavaliers added to that legacy on Wednesday when the boys’ team won their first ever Saginaw Valley League championship with 130.5. The Lady Cavs came in ninth with 37.5.

On the boys’ end, Cleandre Robinson won the discus, tossing it 134- feet, 8-inches and Bryant Hudson placed second in the 110-meter hurdles in 15.62. Tyler Minor ended up in third place in the long jump at 20-feet, 8.5- inches before the 800- meter relay team of Jevonte Alexander, Antwon Curtis, Kiyon Bush and Minor placed first in 1:31.97.

For the Lady Cavs, Harmony Williams sealed up second place in the 100-meter hurdles in 16.80, while Chaquia Jones tied for third in the high jump at 4-feet, 8-inches. Williams, Alyssa Garcia, Randi Richardson and Italia Daniels placed second in the 800-meter relay in 1:50.08 and Garcia, Williams, Daniels and Ashley Hall came in second in the 400-meter relay in 51.79.

The Cavaliers will now await the state meet at East Kentwood on June 1.