OWOSSO – After beating Flushing 61-56 last Friday for the Class A district championship at Flushing, the Carman- Ainsworth varsity boys’ basketball team advanced to regionals on Monday against Saginaw at Owosso. While these two teams did split their regular season matchups, this time the Trojans got out to a 32-21 lead at halftime by sinking a pair of 3-pointers at the end of the half. That led to a 65-45 win over the Cavaliers.

“Saginaw came out and got us in the three-quarter court. They pressured us a little bit, and just like the second time we played them, they were able to get some open looks and they knocked them down,” said Carman-Ainsworth coach Jay Witham. “We wanted to go with a zone (defense) against (Saginaw) because we had success against them the first time we played. I thought we did a very good job with our zone. They had that little run at the end (of the first half), but it did work for us for a minute.” 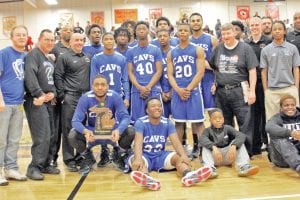 Once Omari Duncan and Owosso’s Henry Speight traded baskets to start the third, Carman-Ainsworth called a timeout at 6:31 to make it a 34-23 game. That launched an 8-7 run for the Cavs that featured field goals by Ja’Kavien Lewis, Terry Armstrong and Duncan. Saginaw’s points came from Ronquavious Southward, Eddie Thigpen and Algevon Eichelberger, which put the Trojans up 41-31 at 3:22.

“(Michael Fletcher) was a monster today. I think he gave his all and then some. What we did was isolated one side with Armstrong and Fletcher and played pick-and-roll with them,” said Witham. “Terry would come off of it and if the big came out on him it was a dump off to Mike. If they stayed with Mike, it was Terry’s time to attack. They did a great job and that helped us get back in the game.”

Next up for the Carman-Ainsworth offense was Abram Monroe. Owosso’s Corey Pritchett and Chan Pearson then exchanged 3-pointers prior to Eichelberger and the Cavs’ Duncan trading free throws to cut the lead to 46-38 at the end of the third. 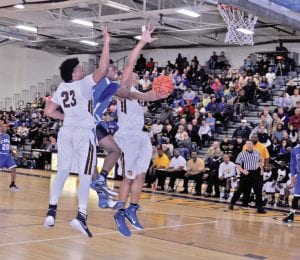 Omari Duncan tries to sneak between Saginaw’s Henry Speight and Algevon Eichelberger (right) in the first half at Owosso on Monday.

“They were coming down and knocking down some shots and we overextended ourselves. They knocked down their free throws, too,” Witham said. “(Saginaw is) a senior led team. They’ve got 12 seniors, while my guys, I’m playing one senior and eight underclassmen. Hats off to Saginaw. They’ve got a tough crew. They get after it. They’ve got some guys who can shoot the ball and they’re going to be tough in their upcoming games.”

The fourth quarter started with a Duncan field goal and was followed by Eichelberger making four free throws in a row to widen the gap to 50-40 at 4:54. Shortly thereafter Saginaw stopped trying to score and instead worked on running out the clock. That forced Carman- Ainsworth to foul the Trojans, who responded with Southward, Willie Shavers and Speight all going 2-for-2 from the charity stripe.

“When we got a little flustered we did throw the ball around. Yes, (this team) plays a lot of basketball, but there are things they’re not good at. A couple of them need work on their ball handling and to become solid shooters from the perimeter,” Witham said. “They’ve got some things to fine tune, but it’s exciting to have them all back. Our seniors took a back seat to these guys and it shows character on their part. They beat up on the younger guys to make them a little bit tougher.”

Fletcher had 16 points, Duncan scored 10 and Armstrong and Chan Pearson added six points each. As for the Trojans, Darrion Adams 21 points, Eichelberger had 17 points and Speight and Southward were good for 10 points apiece. During the regular season Carman-Ainsworth won at the Trojans 63-56 on Jan. 8 and Saginaw claimed a 75-58 victory on Feb. 26 at Davison in the Saginaw Valley League title game.

“Any tough game that we lost, we did keep our composure and poise to battle back and make a game out of it. For a second there we were only down six points and that’s a credit to the maturity of those young guys,” said Witham. “This is going to be a special group. All my basketball players are all back (next year). I’m proud of these guys. Now we just have to get them in the weight room and get them stronger.”

The Trojans advanced to the Class A regional finals yesterday against Midland, which beat Traverse City West 61-59 on Monday.

Carman-Ainsworth won 61-56 at Flushing to win the district championship last Friday after defeating Swartz Creek 83-40 on March 9 in the semifinals.