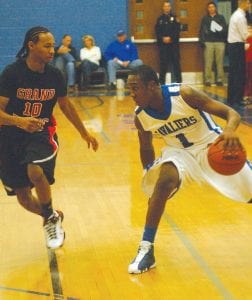 Carman-Ainsworth’s Denzel Watts (1) got around the Grand Blanc defense for 20 points Tuesday night.

FLINT TWP.
— That wasn’t quite the same team that Bob Root had been watching in practice for three weeks, but the Carman-Ainsworth coach wasn’t complaining.

The Cavaliers jumped into the new season at full speed Tuesday, putting Grand Blanc on its heels early and routing the Bobcats, 72-47, in the season opener for both teams at Carman-Ainsworth High.

Denzel Watts scored 20 points and Anton Wilson had 18, as Carman-Ainsworth answered a lot of questions in the opener of a rebuilding year.

“I really didn’t know what to expect because in practice we haven’t played with the intensity we came out with tonight,” said Root. “So it was a pleasant surprise the way we got a big lead and pretty much maintained it. We had some low points early in the second half, but the kids did a good job of keeping their poise and not allowing them to get a run and come back.”

“We got running pretty good so we got to the basket a few times,” said Root. “We hit a couple threes. But the key was our defense. We created some fastbreak opportunities with our defense and we did a good job of cutting off lanes for their quick guards and not allowing them to get to the basket.”

Trevette Cochran-Moore added 11 points and Nick Hill and Desmond Morris scored seven each, as all 13 Cavs played and eight scored. Wilson had four of the Cavs’ six 3-pointers.

Both teams are rebuilding, with Carman-Ainsworth having lost three three-year varsity starters last year. But the Cavaliers had the advantage of homecourt for the first game of the season and a boisterous student section in the Gravel Pit.

The lopsided victory did leave one question unanswered for Root and the Cavaliers.

“We didn’t have to face adversity tonight,” said Root. “The key to success is how you respond when you have adversity. That’s going to be the next test for us.”

The Cavaliers will hit the road Friday for a game at Howell, then host perennial Class A power Clarkston next Tuesday.