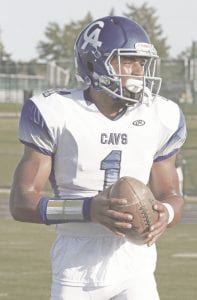 Carman-Ainsworth’s Troy Brown (1) had four catches for 75 yards and one touchdown against Midland Dow.

The win was the fifth in a row for the Cavaliers after losing two of their first three contests this season. The sixth victory of the year accomplished plenty for Carman-Ainsworth as it assures a spot in the state playoffs and keeps the momentum rolling as it gets ready for a tough Lapeer squad at home tomorrow in the final game of the regular season. The Cavs are ranked No. 8 in Mick McCabe’s Week 8 Div. 2 rankings.

Carman-Ainsworth never trailed against the No. 5-ranked Chargers on Friday, but the contest was close throughout.

Quarterback Dustin Fletcher, who completed 13-of-20 passes for 178 yards and a pair of touchdowns, connected with Dewayne Gurley for a 33-yard score early in the contest. Zack Amthor booted the extra point to give the Cavaliers a quick 7-0 edge. 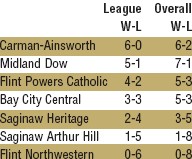 Jakobe’ Blount found pay dirt on the next Carman-Ainsworth possession, running the pigskin in from five yards away. Amthor’s kick made it 14-0 with 7:29 still remaining in the opening stanza.

Dow scored on a 90-yard pass with just one second to go in the first, but the two-point conversion run failed and the visitors held a 14-6 advantage heading into the second quarter.

Fletcher ran for a 10-yard score with 8:11 to go before halftime and Amthor’s third straight PAT expanded the lead to 21-6. However, Dow hit for another long scoring pass, this one covering 69 yards. The two-point conversion attempt failed again and the Cavs held on to a 21-12 cushion at intermission.

Dow scored midway through the third and converted its two-point try to pull to within 21-20, but the Cavs regained the momentum when Fletcher ran for a 21-yard TD with 3:27 to go in the third period. Amthor’s extra-point kick was blocked to leave the Cavs up, 27-20.

Neither team could score again until Fletcher hooked up with Troy Brown for a 43-yard pass with under four minutes left in the contest. Amthor’s kick gave Carman-Ainsworth a 34-20 advantage. The Chargers scored on their next possession to pull within 34-27, but it was too little, too late and the Cavs were able to celebrate a league crown, a spot in the playoffs and their fifth consecutive victory.

Fletcher ran for 106 yards and a pair of touchdowns in addition to his prowess through the air. His favorite receivers were Brown (4 catches, 75 yards, a TD) and Gurley (5 catches, 75 yards and a score). Lequine Jarrett and Marshall Brooks each caught a pair of aerials. Marreon Givens rushed for 80 yards on 21 carries.

DarQuavis Tabron logged 5.5 tackles on five solos and one assist. He also had an interception. Romeo Evans had 4.5 stops and Javez Abernathy came up with two solos and three assists for 3.5 tackles.