Cavs come alive in second half to edge Howell 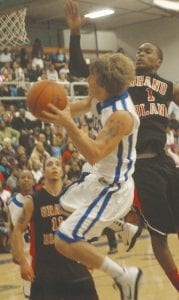 Nick Hill and the Cavaliers cruised against Grand Blanc, but struggled to beat Howell.

HOWELL
— Their first contest was so easy, Bob Root was left wondering how his Carman-Ainsworth Cavaliers might handle adversity in a tight basketball game.

He found out last Thursday night.

Carman-Ainsworth roared back from a lethargic first half and a nine-point deficit to pull out a 47-45 victory over Howell in a non-league game on the Highlanders’ court. It was quite a difference from their 72-47 rout of Grand Blanc in the opener.

Denzel Watts scored 19 points on four 3-pointers and Desmond Morris added 16 points, as the Cavs improved to 2-0. They were scheduled to host Clarkston on Wednesday in a game that was postponed from Tuesday.

Before a small crowd in their first road game of the season, the Cavs managed just nine first-half points against Howell’s matchup zone defense and trailed, 18- 9, at intermission.

“It was just very, very poor basketball,” said Root. “We were flat coming out and the kids just weren’t into it. Their matchup zone bothered us and we didn’t get many good looks at the basket.”

The Cavs came to life with a 15-11 third quarter to pull within 29-24, then went ahead by seven points in the fourth. They were still up, 47-45, with 11 seconds left, and had a chance to ice it when a long baseball pass resulted in an open layup. But the shot missed and Howell had one more chance to win it, missing a 3-pointer at the buzzer.

The Cavs are back on the road Friday with a game at Bloomfield Hills Lahser, then will host Utica Eisenhower next Tuesday.