Cavs come up short in quest for state meet 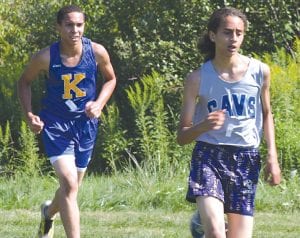 Ryver Jarrett (right) works his way through the course for the Carman-Ainsworth cross country team.

UNIVERSITY CENTER — The Carman-Ainsworth cross country teams traveled to Delta College last Saturday for the regional meet and fell short in their bid to advance to the state meet.

The Cavs’ boys team finished 12th out of 15 teams with 339 points. Grand Blanc won the race with 39 points, Traverse City Central was second with 67 and Saginaw Heritage was third with 87.

The girls’ squad did not have enough runners to qualify for a team score. TCC won the girls’ race with 47, Midland Dow was second with 77 and Davison took third with 113.