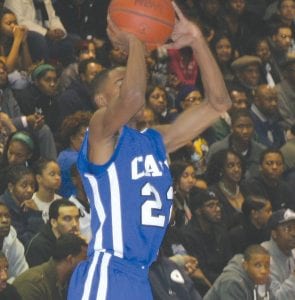 Carman-Ainsworth’s Jaylen Randall puts up a shot from the field.

SWARTZ CREEK — The Carman-Ainsworth boys’ basketball team has been playing better basketball of late and it shows in the standings, as the Cavs had won nine in a row entering Tuesday’s contest with former Big Nine rival, Swartz Creek.

The Cavaliers ran into a Swartz Creek team that was coming off a loss to Fenton and looking to get back on the right track. The Dragons led from start to finish en route to a 75-63 victory.

Carman-Ainsworth fell behind, 19- 5, after the first quarter, but got back in the game in the second quarter and trailed, 37-29, at the half.

The Dragons outscored the Cavs, 18-14, in the third quarter and put an end to Carman-Ainsworth’s comeback bid. Both teams scored 20 points in the fourth quarter.

Denzel Watts scored a game-high 38 points, but no other Cavalier scored in double figures. Cameron Morse and Malik Seales added eight points and Jaylen Randle chipped in with six.

The Dragons were led by Max Cummings’ 22 points and JD Tisdale scored 20.

The Cavs, 11-6 overall, 5-0 Big Nine, host Davison on Friday with the outright Big Nine title on the line. Carman-Ainsworth ends the regular season next week with a game at Utice Eisenhower on Tuesday and a home game against Brandon on Thursday.