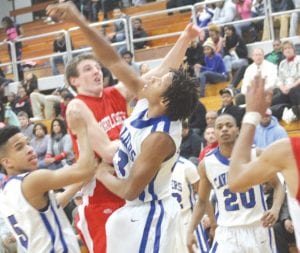 FLINT TOWNSHIP — The Carman-Ainsworth boys’ basketball team was in for quite a battle on Tuesday against former Big Nine rival Swartz Creek. The Cavaliers had to battle back and win the game in overtime, 69-68.

Carman-Ainsworth began its comeback in the third quarter with a 17-14 advantage to trail by one entering the fourth quarter. The Cavs outscored Creek, 18-17, in the fourth quarter to send the game to overtime and used an 11-10 edge in overtime to grab the win.

The Cavaliers scored a late basket and had to nervously wait as Creek’s JD Tisdale missed two free throws down the stretch to earn the victory.

Denzel Watts led all scorers with 23 points, Cameron Morse came through with 16 and Justice Green added 13.

Creek was led by Tisdale with 20 points, Cal Henry added 19 and Max Cummings chipped in with 12.

Last Thursday, the Cavaliers traveled to Davison for a Saginaw Valley League showdown and won going away, 78-46.