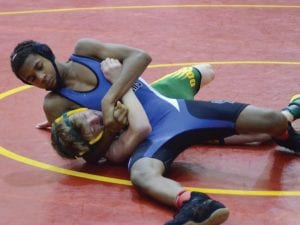 DAVISON — In an event highlighted by big matches and even bigger schools, the Carman-Ainsworth varsity wrestling team took the mat at the 2014 Genesee County Meet hosted by Davison last Saturday. Highlighting this effort was Jalan Beaugard winning by pin against Swartz Creek’s Brandon Gilson. At 285 lbs., Hilton Gamble lost to heavyweight powerhouse Dan Perry of Lapeer by fall in 1:38. Ira Goulborne was in action, as well, losing to the Lightning’s Justin Thomas by pin.

In dual meet action on Dec. 17 Grand Blanc beat Carman-Ainsworth 41-33 despite Demetric Hall downing Parker Dalson in 2:30 at 119 and Darien Vaughn defeated Samuel Trevillian in 2:30 at 140. Malik Dawkins also came out ahead after getting the better of Seth Miller 1-4 at 171, the Cavs’ Ronald Roland outlasted Anthony Cavotta 17-13 and winners by forfeit included Grayden Hamilton at 285 and Elijah Brandon at 103. — M.S. 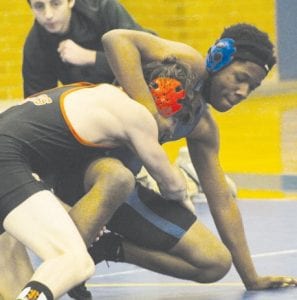 Although they weren’t able to win a dual, the Cavaliers did have three grapplers go undefeated at the meet, including Vaughn at 140, Dawkins at 171 and Jacob Yost at 103. — B.P. 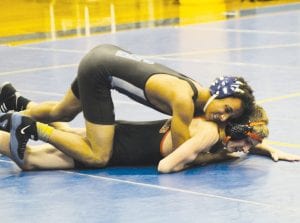