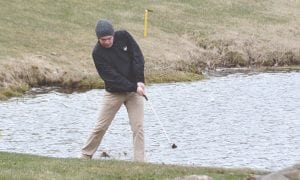 Carman-Ainsworth’s Aaron Carter chips out of the rough during a meet at Metamora Golf and Country Club on April 25.

GRAND BLANC – The Carman- Ainsworth boys’ golf team competed at the Genesee County Tournament on Monday at Atlas Valley Golf Club in Grand Blanc, placing 18th overall with a 474. In first was Flint Powers with a 300, followed by Grand Blanc in second with a 321 and Lapeer in third with a 330.

John Karbowski led the team with a 96 and was followed by Lucas Bostwick with a 118 and Jalen Stewart with a 124. Both Aaron Carter and Nathan Ratynski carded a pair of 136s.

Last Wednesday, the Cavaliers competed in the second Saginaw Valley League tournament of the season, placing 11th with a 493. Lapeer was first with a 311, Flint Powers second with 314 and Midland Dow third with a 346.

Carman-Ainsworth will compete in the third SVL tournament of the season at Bay County Golf Club on Wednesday, a make-up date from April 18.