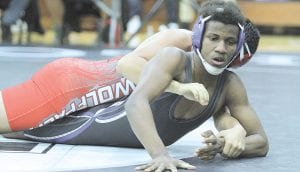 Larry Brown of Carman-Ainsworth works to get free from a Laingsburg opponent during last Saturday’s tournament at New Lothrop. Photo by Andy Whitcomb

At 103 lbs., Jabril Muhammad placed fourth overall and began with a first-round bye. In the quarterfinal, Muhammad won by an 11-8 decision over Birch Run before losing to New Lothrop by fall in the semifinal. Muhammad lost by fall to Richmond in the third-place match.

Carman-Ainsworth will compete in the Warren Woods- Tower Clash of Champions Saturday.