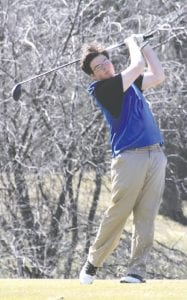 METAMORA – Carman-Ainsworth competed in the annual varsity boys’ golf Lapeer Tune-Up last Friday at the Metamora Golf and Country Club, placing 16th overall out of 23 teams with a total of 395. The all-day tournament was played in conditions that were less than ideal, as high winds traveled across the entire course, adding on to the cold temperatures that already gave the golfers a challenge. First place went to host Lapeer, who shot a school-record 308. Second place was Utica Ford with a 324 and third was Goodrich with a 337.

John Karbowski shot Carman- Ainsworth’s low score, carding a 91 in the cold and windy conditions. Tyson Fields carded a 97, Aaron Floyd shot a 103 and Kaden Rytlewski added a 104. Carman-Ainsworth finished between Lake Fenton, which shot a 387, and North Branch, which shot a 430.