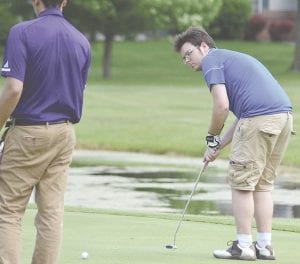 DAVISON – The Carman- Ainsworth boys’ varsity golf team competed in its Div. 1 regional competition at Davison Country Club on Friday. The top-three teams and topthree individuals not on a qualifying team earned a spot in the state finals, held tomorrow and Saturday at the Fortress in Frankenmuth for Div. 1.

Carman-Ainsworth was unable to post a team score in the event, as it had just three golfers compete. Grand Blanc won the regional with a team-total 317, while Okemos was second with a 326 and Lapeer third with a 330. Individually, Carter Housler of Grand Ledge, Travis Gist of Davison and Murphy Kehoe of Traverse City West snagged the final three individual qualifying spots.

The Cavs were led by John Karbowski, who finished the day with a 97. Nathan Ratynski carded a 114 and Aaron Carter added a 119 to round out the team’s scores.