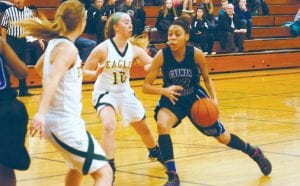 The Lady Cavs zoomed out to a 22-9 lead in the first quarter and rode that to a 37-20 halftime advantage. They put the game out of reach with a 20-7 third period, giving them a 57-27 command going into the fourth.

The Lady Cavs, 13-7, moved on to play Kearsley in last night’s semifinals, while Davison, which eliminated Lapeer West 41-27 in the other opener, took on Swartz Creek. The district final is at 7 p.m. Friday.

Carman-Ainsworth’s final regular-season game against Mount Pleasant last Friday was canceled by inclement weather and not made up.