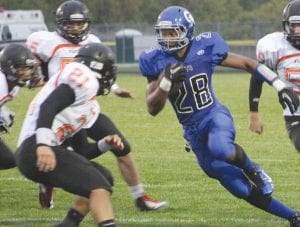 FLINT TWP. — Carman-Ainsworth put up another big number last Friday in a 43-0 football rout of Flushing, but it was the zero that stood out in this victory.

The Cavaliers twice denied the Raiders a score after Flushing had driven inside the five-yard line late in the first half. Carman-Ainsworth stuffed the Raiders on fourth-and-goal at the oneyard line with 3:07 left in the half, then stopped them on four straight plays inside the five in the final minute. The Cavs had another goal-line stand in the second half.

It was the second shutout of the season for the Cavaliers, who improved to 5-0 overall, 2-0 in the Saginaw Valley League South Division, and climbed to No. 3 in the state rankings this week. Alton Yarbrough led the defense with eight tackles and Jack Baker made five. Brandon Walker returned an interception 57 yards for a defensive touchdown in the third quarter.

The offense rolled on as usual, despite a game-long rain. Gerald Holmes ran for 166 yards and two touchdowns on just eight carries as Carman-Ainsworth totaled 383 yards on the ground and 403 overall. Carman-Ainsworth has outscored its five opponents this year, 207-27.

The Cavs again struck early, with Holmes scoring on a 39-yard run just 40 seconds into the game. Connor Storms kicked the extra point for a 7-0 lead.

Malik Seales ran in from the seven with 5:29 left in the quarter and Jevonte Alexander ran in the two-point conversion for a 15-0 lead.

Alexander made it 22-0 with a 34-yard touchdown run on the first play of the second quarter, and Holmes bolted 75 yards for another score to make it 29-0 with 1:17 left in the half.

Walker’s pick-six with 6:51 left in the third quarter made it 35-0 and triggered a running clock. The Cavs completed the scoring on Nate Williams’ 75-yard touchdown run and Alexander’s two-point conversion run with seven seconds left in the game.

Williams finished with 85 yards rushing on two carries, and Seales had 83 yards on nine attempts. Flushing managed just 165 total yards, and was minus-27 rushing.

Carman-Ainsworth will plays its homecoming game this Friday against Flint Northwestern, 0-5. The Cavs are one of three unbeaten teams in their division, but that number will dwindle to two when Powers Catholic and Davison meet this week. Carman-Ainsworth will visit defending state champion and No. 1- ranked Powers next week in the most anticipated game of the season in Genesee County. The Cavs will host Davison in the regular-season finale Oct. 19.