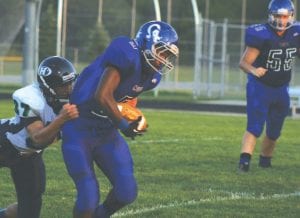 Carman-Ainsworth’s Lorenzo Redmond drags a defender as he tries for more yardage.

Carman-Ainsworth introduced itself to Saginaw Valley League football last Thursday with an impressive, 45-7 rout of Saginaw Heritage in a crossover game between division schools. It was the Cavs’ first contest in the newly expanded Valley, which split into North and South divisions this year after absorbing the four schools from the now-defunct Big Nine Conference.

The win doesn’t count on their league record, but the lopsided score served notice to the Cavs’ opponents in the South Division.

Gerald Holmes rushed for 128 yards and two touchdowns on just six carries, and Malik Seales rushed five times for 111 yards and two more scores, as Carman-Ainsworth improved to 2-0 overall. Just as in their season-opening win at Grand Blanc a week earlier, the Cavs broke loose for several longyardage scores, starting with Seales’ 64- yard touchdown run on their first play from scrimmage just 16 seconds into the game. Connor Storms kicked the first of his three extra points for a 7-0 lead.

Holmes topped that later with an 80- yard touchdown sprint, again on first down, for a 14-0 lead with 3:38 left in the period. The Cavs upped that advantage to 27-0 in the second quarter on Seales’ 7-yard run at the 5:31 mark and Brandon Walker’s 30-yard touchdown catch from Storms with 23 seconds left.

Carman-Ainsworth totaled 360 yards on the ground, and Storms added 64 yards through the air on 5-of-9 passing. Seales also had six tackles and two assists on defense, while L’Daryl Mosley made five tackles with two assists.

The Cavs will play their final nonleague game this Friday, when they host Inkster at 7 p.m.