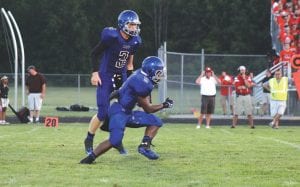 Carman-Ainsworth’s Lorenzo Redmond (5) rushed for 25 yards and a touchdown in the Cavs’ multi-pronged attack.

One week before a showdown with Davison for the Saginaw Valley League- South Division championship, the Cavaliers focused entirely on Southwestern and thrashed the Knights, 48-0, in an SVL-South game at home.

Six different players scored touchdowns, two on defense, as eighth-ranked Carman-Ainsworth, 7-1 overall, improved to 4-0 in the league to match Davison’s 4-0 league record. Those teams will meet for the title at 7 p.m. Friday at Cardinal Stadium.

The Cavs wasted no time asserting their dominance, putting five touchdowns on the board in the first quarter and scoring two more in the second period to set up a running clock for the second half.

Malik Seales opened the rout with a 2- yard touchdown run for a 6-0 lead. Connor Storms missed the extra point, but didn’t miss the rest of the night.

Lorenzo Redmond made it 13-0 with a 3-yard run, and Seales scored again on a 1-yard run for a 20-0 command. Jevonte Alexander returned a fumble 55 yards for another score, and L’Daryl Mosley took an interception 10 yards for a 34-0 lead after one quarter.

Demarion Allen broke loose on a 49- yard touchdown run in the second quarter, and Brandon Walker capped the scoring with an 8-yard touchdown reception from Alexander for a 48-0 halftime lead.

Alexander led the rushing game from his quarterback position with 95 yards on just four carries. Previously a wide receiver, the senior was moved to quarterback in mid-season to get the ball in his hands more often.

“It was just what we needed for our team,” said Carman-Ainsworth coach Nate Williams. “He’s a competitor and very explosive with the ball in his hands. We want to give ourselves an opportunity to utilize him in a couple different ways.”

Allen added 61 yards on just three carries as the Cavs rolled up 195 yards on the ground. Redmond ran five times for 25 yards and Seales carried five times for 17 yards. Alexander hit 2-of-5 passes for 27 yards and Storms connected on 1-of-4 for 38 yards.

Southwestern totaled just 156 yards, with 94 coming through the air. The Knights fell to 1-7 overall and finished 1-4 in the Valley.