Cavs dominate Flint on the gridiron 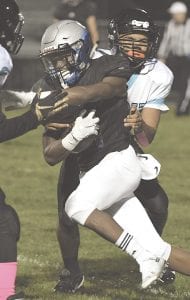 FLINT TWP, – The Carman- Ainsworth football team secured its second win of the year last Friday, as the Cavaliers blew out the Flint Jaguars 62-18.

It was the first time this season that the Carman-Ainsworth offense scored more than 22 points. Stats and details went unreported.

The Cavs close out the season tomorrow at Flint Powers Catholic with a 7 p.m. kickoff.