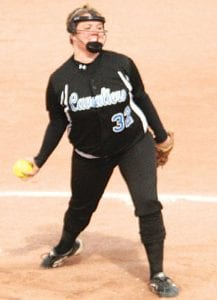 Carman-Ainsworth’s Keri Crane goes through the wind up in the circle.

CLIO — Carman-Ainsworth learned its opponent for the district softball tournament this weekend and, as expected, the Cavaliers will he facing host Clio. The Mustangs dispatched of Flint Northern, 18-0, in Tuesday’s pre-district game.

Carman-Ainsworth, 4-27, will meet Clio, 19-12, at about noon Saturday in the Div. 1 district semifinals. Metro League champion Swartz Creek, 31-6, and Big Nine Conference co-champion Flushing, 20-12, meet in the other semifinal at 10 a.m. The district final will be played at about 2 p.m.

The district champion will advance to the Saginaw Valley State University regional June 9 against the winner of the Bay City Western district. — D.N.