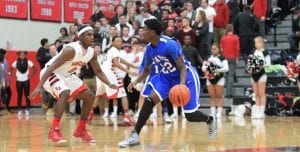 GRAND BLANC – Carman- Ainsworth came out hot in the first quarter but went cold the rest of the night and dropped a 54-40 decision to Grand Blanc in the boys’ basketball season opener for both teams Tuesday night at Grand Blanc.

The Cavaliers jumped out to a 16-12 lead but scored just 24 points over the last three periods. Grand Blanc tied it 25-25 at halftime, then took control with a 16-7 third quarter to go up 41-32 heading into the final eight minutes.