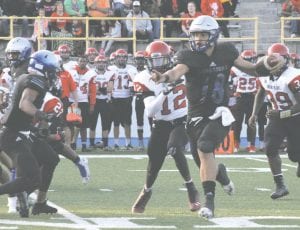 Carman-Ainsworth’s Dustin Fletcher calls for a block during a game against Grand Blanc on August 24.

The Cavs kept the game close in the first quarter, trailing just 14-7 headed into the second. Midland Dow kept its foot on the gas, however, and pulled away to hand Carman-Ainsworth its third loss of the season.

Individual stats from the game were not reported.

Carman-Ainsworth, 5-3, travels to Lapeer, 5-3, tomorrow for what could be its final game of the season. The teams are playing for the coveted automatic playoff berth that comes with a six-win season. Lapeer sits in third in the Saginaw Valley League- Red while Carman-Ainsworth is still in first in the SVL-Blue despite last week’s loss.

Lapeer is coming off of a 35-14 loss to Midland last week, its second loss in a row after falling to Davison the week before. The Lightning have allowed just 165 points through their eight games this season while scoring 258. Carman-Ainsworth has given up 226 points during its games this season, but has scored 294, meaning its offense will need to continue to fire on all cylinders while its defense tightens up if it is to extend its season against a tough Lapeer squad.

The game is slated to kick off tomorrow at 7 p.m. at Lapeer. Teams will be tuned in to FOX Sports Detroit Sunday at 7 p.m. for the annual Selection Sunday show that will detail which teams made the playoffs and who they will play in the pre-district rounds.