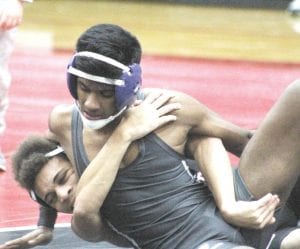 Brijesh Kumar of Carman-Ainsworth works to break free from a Grand Blanc opponent during a meet on December 18. Photo by Joe Oster

DAVISON – The Carman- Ainsworth wrestling team lost both of its contests during a Saginaw Valley League meet at Davison last Thursday, losing 48-18 to Lapeer and 42-24 to Flint Powers Catholic.

Carman-Ainsworth is slated to compete in the Saginaw Valley League Championship at home on Saturday.