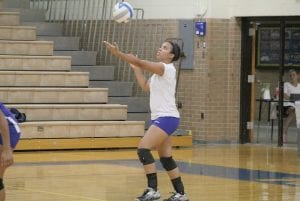 Kayla Tigner had another strong outing for the Cavaliers stuffing the stat sheet full in a win over Holly with 35 assists.

Jessica McClung also had another productive night for Carman- Ainsworth, chipping in 14 kills and added 11 digs.

But, Tigner and McClung weren’t the only two contributors for the Cavaliers. Three other players made their presence felt during the match.

“I thought we came out strong and hungry,” Carman-Ainsworth coach Barb Hurand said. “I felt it was a very good match, both teams wanting to win.

“Flushing really picked up in games two, three and four at the right time, with that time being crunch time. Regardless, I was proud of my team’s effort tonight.”

“We got off to a slow start in game 1, and Holly took advantage of our missed serves and lack of aggressiveness on the defensive end,” Cavaliers coach Barb Hurand said. “We did a much better job of controlling things on our side of the court in games two, three and four.

“I thought Holly was a tough team and we had to play an aggressive game to beat them. I was proud of my team because we stepped it up and got the win.”

The Cavaliers traveled to Byron for a non-conference match today.