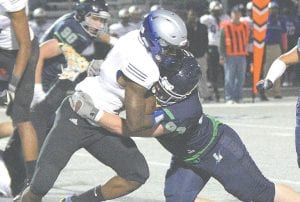 Carman-Ainsworth’s Jacari Roberts fights through a tackle during a game with Lapeer on October 20.

FENTON – Carman-Ainsworth’s football season came to a close following last Friday’s first-round playoff loss to Fenton, 42-16. Fenton finished the season with a record of 8-1 while Carman-Ainsworth entered the game at 5-4.

The Cavs opened the scoring for the game after a 21-yard field goal in the first quarter to lead 3-0. Fenton then responded with a pair of rushing touchdowns to lead 14-3 entering the second.

Early on in the second, the Tigers scored their third-straight rushing touchdown to lead 21-3. The Cavs responded with an 8-yard touchdown run from Jalen Smith to close the deficit at 21-10 before Fenton again marched down the field and scored on an eight-yard run to lead 28-10 headed into halftime.

Both teams traded touchdowns in the third quarter after Carman-Ainsworth quarterback Dustin Fletcher connected with Dwayne Gurley for an 18-yard score and Fenton connected on a pass from 22-yards out to score. Fenton entered the fourth quarter leading 35-16 and added on one more touchdown while holding the Cavs scoreless to come away with the win.

The Cavs finished the season with a 5-5 record and were placed at the top of the Saginaw Valley League’s Blue Division with a league record of 5-1.