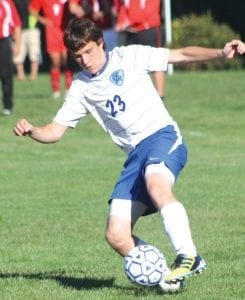 James Henderson gets the ball under control for the Cavaliers.

FLINT TWP. — Carman- Ainsworth got its first taste of Saginaw Valley League soccer on Sept. 5 and came away with a sour, 8-0 loss to Midland on its home field.

The visiting Chemics scored five goals in the first half and ended the game via the eight-goal mercy rule with three more in the second half. Midland is 6-0 overall.

Carman-Ainsworth was coming off a win and a tie, but fell to 1-5-1 on the season. The Cavaliers played another Saginaw Valley League game yesterday at Flint Northern and will host Saginaw Nouvel in a nonleague game at 4:30 p.m. today. — D.N.