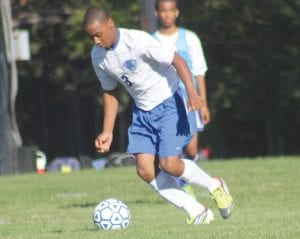 Stefon Clark moves the ball upfield in a game earlier this season.

FLINT TWP. — Carman-Ainsworth fell to 0-2 in the Saginaw Valley League-South Division last Monday with a 7-0 loss at home against Flushing.

Cavaliers’ goalkeeper Andrew Ramirez had six saves to help fend off a mercy-rule ending. Flushing built a 4-0 lead by halftime and tacked on three more goals in the second half. The Cavs had two shots on goal.

Carman-Ainsworth split two games in the Cavalier Classic last Saturday, losing, 2-0, to Clio in the opener and beating Mt. Morris, 3-1, in the consolation game.

Clio scored two goals in the last seven minutes to pull out the first game, after Carman-Ainsworth started fast and put 10 shots on goal.

“We actually played very well,” said Cavs’ coach Jay Witham. “I was very encouraged how we played coming off the loss to Nouvel. We came out on fire and had Clio on their heels. We had a lot of opportunities.”

The Cavs bounced back against Mt. Morris, as Anas Morsi opened the scoring on a penalty kick just seven minutes into the contest. Mt. Morris tied it about three minutes later, but Leon Bell gave the Cavs the lead for good later in the half on a goal assisted by Sheridan Cox. Bell added an insurance goal midway through the second half, assisted by Morsi.

The Cavs dropped a non-league match last Thursday at home to Saginaw Nouvel, 3-0. Ramirez had 10 saves.

Carman-Ainsworth, 2-8-1 overall, hosted Mount Pleasant in a Valley game yesterday and will host Flint Northwestern in another league contest next Monday.