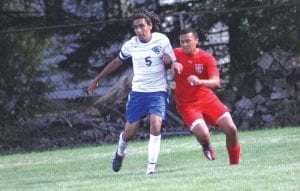 Anas Morsi, here battling for position in a game last year, had a big hand in one of the Cavs’ goals Monday at Flushing.

FLUSHING — Carman-Ainsworth held a one-goal lead in the second half, but ultimately fell to Flushing, 4-2, in a Saginaw Valley League-South Divison game Monday at Flushing.

The game was tied at halftime, 1-1, after Flushing scored on a penalty kick and Leon Bell scored for Carman-Ainsworth on an assist from Tyler Springer.

The Cavaliers went up, 2-1, about 10 minutes into the second half when Anas Morsi fought through three defenders and slipped the ball over to Bell, who then fed Terance Greene for the goal.

But, Flushing kept the pressure on and rallied for three goals to pull it out.

“It was a very good game, with both teams up and down,” said Cavs’ coach Jay Witham. “They possessed the ball more and we made a couple mistakes in the second half.”

The game was typical of the improvement of the Cavs, who stayed close with soccer powers Midland and Fenton in earlier games.

“We’re getting close to getting over the hump,” said Witham. “The effort has been there for my guys the whole season. We make a couple mistakes here and there, but we’re right there on the cusp.”

Andrew Ramirez was busy in goal with 12 saves, including two standout stops to keep the Cavs in the game.

Carman-Ainsworth, 1-8 overall and 0-1 Valley, will host the Cavalier Classic on Saturday.