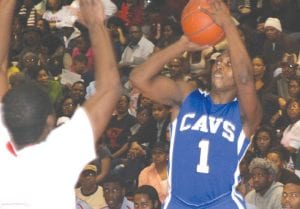 Carman-Ainsworth’s Denzel Watts puts up a shot from the perimeter.

The Cavaliers hosted Flint Southwestern Academy on Tuesday and earned a hard-fought win in comefrom behind fashion, 55-52.

The Knights jumped out to an early, 13-11, lead after one quarter and the second quarter saw each team score 14 points.

Southwestern Academy outscored the Cavs, 15-12, in the third to lead, 42-37. Carman-Ainsworth turned up the offense and used lockdown defense to outscore the Knights, 18-10, in the fourth and earn the win.

Last Friday, Carman-Ainsworth traveled to Flint Powers Catholic and pulled out a 53-41 victory. The Cavs led, 11-7, after one quarter and 28-19 at the half. 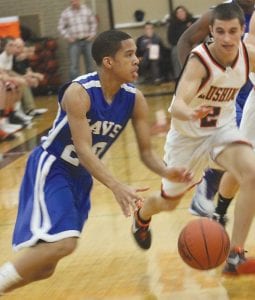 Carman-Ainsworth’s Justin Person (#20) drives to the hole earlier this season.

Watts once again led the Cavs with 18 points, while Morse added 14 and Justin Person and Randle combined to score 15.

Carman-Ainsworth, 11-5 overall, 5-0 Big Nine, will travel to Swartz Creek on Tuesday and hosts Davison on Feb. 24 with the Big Nine title up for grabs.