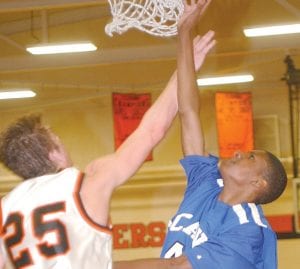 FLINT — The Carman-Aisworth boys’ basketball team got out of the gate slow this season, but will now look to turn things up a notch after earning its first win of the season on Dec. 16 over Bloomfield Hills Lahser, 63-51.

The game was close early, as the score was tied at 12 after the first quarter and Lahser led at the half, 23-21. Carman came out strong in the second half and outscored Lahser, 23-11, in the third quarter and put the game away with a 19-17 advantage in the fourth.

Besides Watts and Person, Jaylen Randle added 11 points for the Cavs, while Cameron Morse chipped in with eight.

Carman, 1-3 overall, stays busy over the winter break with a game on Dec. 28 against Flint Northern. The game is a part of the Coca-Cola Classic. The Cavs get a rematch with Grand Blanc on Jan. 3 at home after falling to Grand Blanc to open the season, 55-49.