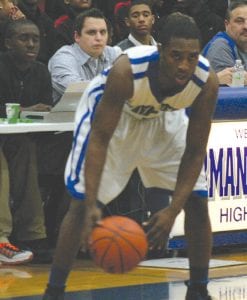 FLINT TOWNSHIP —The Carman-Ainsworth boys’ basketball team hosted Flint Northern on Tuesday, but the contest was more than just a regular game for the Cavaliers. Carman-Ainsworth was competing in its first game as a member of the Saginaw Valley League-South and earned the victory, 79-64.

The Cavs outscored the Vikings in every quarter to slowly pull away. Carman- Ainsworth turned a 15-14 first quarter lead into a 34-29 lead at the half. The Cavs outscored Northern, 21-15, in the third quarter and 24-20 in the fourth to earn the victory.

The Vikings stayed in the game thanks in part to Kaylin Johnson’s 24 points and four rebounds. Also coming up big for Northern was Amariontez Ivory with 13 points and five boards.