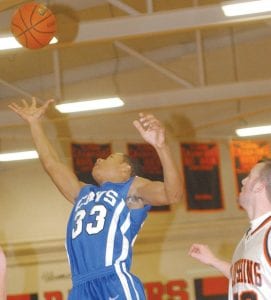 Gerald Holmes skies for a rebound in last Friday’s game at Flushing.

The Cavaliers insist they weren’t overlooking the Raiders, but still they had to fight from behind to pull out a 50-47 win.

Freshman Cameron Morse came off the bench to score a career-high 20 points and Anton Wilson blocked Flushing’s last 3-point attempt at the buzzer, as Carman escaped the Raiders’ raucous gym with a win and improved to 7-2 overall.

The Cavaliers, an honorable mention team in Class A, had blitzed No. 5 Bridgeport as ranked in Class B by the Free Press, by 29 points just three days earlier and have a showdown with current No. 5 AP poll Powers tomorrow night.

But the 4-3 Raiders gave them all they could handle Friday, jumping out to a 14-6 first-quarter advantage and holding the lead deep into the third quarter.

“I honestly don’t think we played that bad,” said Carman coach Bob Root. “I like the way we hung in there and battled back defensively and took the lead.”

“He’s just starting to get some (playing) time, but he played well up in Bridgeport and he’s starting to get a little confidence,” said Root. “He can shoot the ball. We’ve got some seniors that can defend and play hard but haven’t been shooting well, so when we were behind we had to put him in and we rode him pretty good. Obviously, if he doesn’t step up and make shots, we don’t win the game.”

“At the end it was pretty scary, but I’m proud of the way we scrapped,” said Root.

Denzel Watts added 12 points, including two free throws and a layup to stretch a 45-44 lead to 49-44 with one minute left. Gerald Holmes scored seven points.