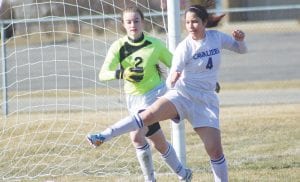 LAPEER – There has been a steady improvement in the Lady Cavaliers all season long, which has primed them for their playoff journey.

They’ll need that confidence in the loaded No. 12-1 district at Lapeer.

Currently at 12-6-3 overall, Creek placed third in the Metro League after shutting out Flushing on Monday, 3-0. Today is the final regular-season game against Carman-Ainsworth, which is also Senior Day.

That will give Carman-Ainsworth a good sense of where it will end up in the district games as Creek will watch it take on Grand Blanc which stands at 11-5-4 overall and was ranked up until the last couple weeks, as high as No. 6, but its rugged schedule put them just outside looking in heading into districts.

Scoring has dogged Swartz Creek this season, and if it hopes to get past Grand Blanc, which is the projected winner of the district opener, the ladies will have to step up their game.

With Ariana Valentine between the pipes and the offensive attack of Alexis Thurber, Melody Bamford, Jessica Bontamasi, Brittany Young and Therese Clausen Brock, the Cavaliers continue to climb as the postseason approaches. — B.P.