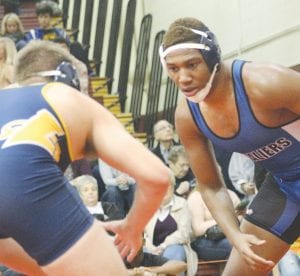 Carman-Ainsworth’s Tae Pendleton (right) faces off with his opponent.

NEW LOTHROP — Despite their status as the top two varsity wrestling teams in the state for Div. 2 according to michigangrappler.com, St. John’s and Lowell still had their work cut out for them at the New Lothrop Invitational last Saturday.

That’s because this 18-team field also included the fourth- and fifthranked squads for Div. 3 in Whitehall and Birch Run, as well as the host Hornets and Addison, which are currently second and fifth in Div. 4.

While this may have put Carman- Ainsworth in the unenviable position of having to work its way through this hotbed of competition one match at a time, the squad responded with an 81- point performance, good enough for eighth place.

Overall, Carman-Ainsworth’s only individually ranked wrestler is senior Aaron Dupree. Currently, the 119- pounder is 10th in the state for Div. 1.